“Why are you wearing that hat, Sir?"
"Because it's so hot, my holiday hat is really useful for keeping the sun off my face."
"That's a good idea, Sir. I take my hat off to you!”
―James and the Fat Controller

Holiday Hat is a magazine story.

The Fat Controller is going on holiday to Spain with his wife and grandchildren. The engines are worried about the railway, but realise that even the Fat Controller should have a holiday. However, there is a heatwave on Sodor when Sir Topham Hatt and his family arrive home and James does not recognise him as he is wearing a sombrero. 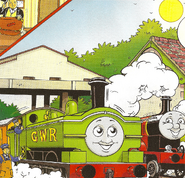 Add a photo to this gallery
Retrieved from "https://ttte.fandom.com/wiki/Holiday_Hat?oldid=1694924"
Community content is available under CC-BY-SA unless otherwise noted.