“Hooray for Henry! Hooray for Thomas, too!”
―the children

Christmas
Hooray for Henry! is a magazine story illustrated using photographs from the television series.

It is winter on Sodor and the island is covered in snow. Thomas hates snow, but Henry loves it. Henry is to take the children on a trip to the forest. On the way, Henry sees some overturned quarry trucks blocking the track. He rushes to find Thomas, who is clearing the tracks with his snowplough. Henry asks Thomas for help and together they push the derailed trucks and dirt off of the tracks. As Henry arrives at the station, all of the children cheer for him and Thomas. 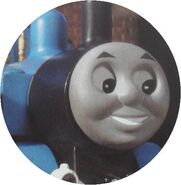