“It's lucky I have floats!”
―Harold after crash landing at sea

Hover Bother! is a magazine story.

The Fat Controller tells James that there will be an air show tomorrow and that he is to take all of the visitors. James is delighted and later on he tells Harold about his important job. Harold is also looking forward to the airshow as he will be giving visitors rides.

The next morning, James is washed, polished and coupled to his carriages. He collects lots of passengers until his coaches are full. James arrives at the Airport just as the show is starting. First of all, there is a flypast led by Jeremy. As Jeremy touches down, sky-divers jump from another plane. They link together in mid-air as their parachutes all open before they land safely on the ground. James is enjoying the show, but Jeremy is concerned that Harold has not shown up after going out on patrol earlier that morning. James' job is complete until it is time to take everyone home, so he decides to leave the show to look for Harold.

James searches for Harold along the seaside and soon arrives at Brendam Docks. James spots Harold by the dockside calling for help. He had rescued a sailing boat and then ran out of fuel and landed on the water. James fetches a flatbed and Cranky lifts Harold onto it. On the way to the Airport, James passes Harvey and asks him to come with them. At the Airport, Harvey unloads Harold who is soon refuelled. Thanks to James, Harold is able to give all of the visitors rides. 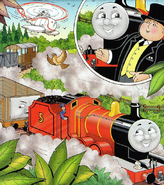 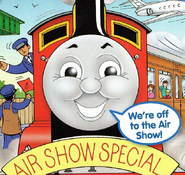 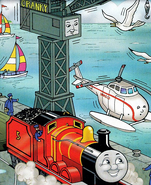 Add a photo to this gallery
Retrieved from "https://ttte.fandom.com/wiki/Hover_Bother!?oldid=1694938"
Community content is available under CC-BY-SA unless otherwise noted.