Thomas the Tank Engine
and Friends 39

“Ha ha! What useless things helicopters are! A little bit of a windy day and they have to stay at home!”
―Gordon

Hurricane! is a magazine story. The second part of this story is titled Clearing Up.

Gordon has taken a strong dislike to Harold. Whenever Gordon hears him, he always complains. When Gordon passes the airfield, he always makes rude remarks calling Harold names such as "bird brain" and "dizzy top". Harold thinks Gordon is being very silly, so he takes no notice.

One morning, Gordon passes the airfield and sees Harold still grounded and calls him lazy. Harold explains that he cannot fly due to a hurricane warning. Gordon thinks it is silly to let a bit of wind stop a helicopter from working. Harold is very cross, but says nothing.

Gordon collects the express and starts on his journey. The wind is very blustery as Gordon crosses the Viaduct. The storm gets worse and soon Gordon has never seen such strong winds.

As Gordon enters the forest, he sees the trees swaying back and forth. Suddenly, there is a loud cracking noise and a crashing noise. Gordon feels something dragging at him. Gordon's driver shuts off steam and Gordon comes to a halt. A large tree had fallen on his tender. The guard comes to see what has happened. Gordon's driver is rather shaken-up. The tree is far too big to move, so Gordon is stuck in the forest.

The guard goes back down the line and sets up flags and warning lights. He does not know that the lines have all been closed due to fallen trees. Surprisingly, the passengers in Gordon's express behave really well as they wait for help; they even sing songs to help pass the time. Soon, Gordon hears a familiar sound. It is Harold who had come to look for Gordon. The passengers all cheer and, this time, even Gordon is pleased to see the helicopter.

A large belt is strapped around the fallen tree and Harold lifts it up. Gordon is very grateful. Harold knows that he and Gordon will be friends from now on. 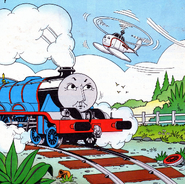 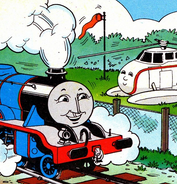 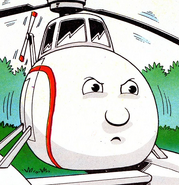 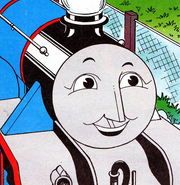 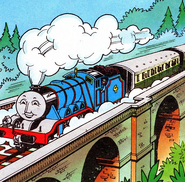 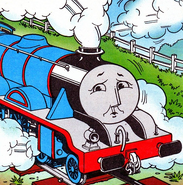 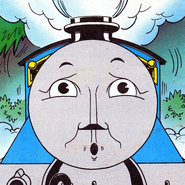 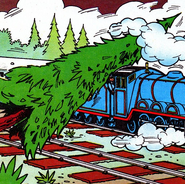 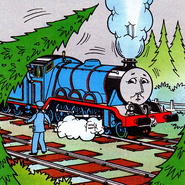 Polski Русский
*Disclosure: Some of the links above are affiliate links, meaning, at no additional cost to you, Fandom will earn a commission if you click through and make a purchase. Community content is available under CC-BY-SA unless otherwise noted.
Advertisement