Bridges
Jack Helps Out is a magazine story, illustrated using photographs from the television series.

One sunny day, Thomas is puffing along his branch line. He is on his way to see his friends from the Sodor Construction Company. Thomas hopes that Jack is behaving himself, if he does not, he may be sent away from Sodor.

Jack and his construction vehicle friends are widening the road beneath the old quarry bridge. Jack is assisting Ned. As Ned rolls under the bridge to collect some rubble, he does not lower his arm enough. He knocks important keystones from the bridge which starts to crumble. Jack can see what Ned has done and is alarmed.

Thomas puffs towards the crumbling bridge, unaware of the danger ahead. Thomas' driver applies the brakes, but it is too late. Thomas screeches onto the bridge which he can feel crumbling beneath his wheels. Jack rushes over to the bridge and holds it up with his front-loader. Thomas' driver is then able to reverse Thomas to safety, but Jack cannot hold the bridge any longer. As Jack reverses out of the way, the bridge collapses completely, but both Thomas and Jack are safe.

Back in the yard, the foreman speaks kindly to Jack who thinks he is going to be sent away. To Jack's surprise, the foreman sends Jack to the fitters yard to have his broken bucket mended, but not before calling Jack a really useful digger. All of the other diggers cry out to welcome Jack to the pack. Jack is so happy that he cannot think of anything to say, so he just revs his engine and grins widely. 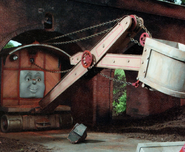 Add a photo to this gallery
Retrieved from "https://ttte.fandom.com/wiki/Jack_Helps_Out?oldid=1695979"
*Disclosure: Some of the links above are affiliate links, meaning, at no additional cost to you, Fandom will earn a commission if you click through and make a purchase. Community content is available under CC-BY-SA unless otherwise noted.