James' Traffic Jam is the first story in the 1993 Annual.

The Fat Controller is travelling to an important meeting on James' train. During the journey, some confused foreign passengers pull the emergency cord believing that it will summon the buffet trolley. James comes to a sudden halt and when he tries to start, his driver discovers the brakes have locked. To make matters worse, the train has stopped on a level crossing, causing an enormous traffic jam. The Fat Controller is worried about being late for his meeting. Luckily for the Fat Controller, Bertie is stuck in the jam and he manages to turn around and take him to his destination. Afterwards, the foreign visitors promise not to make the same mistake again and James is certain that they never will. 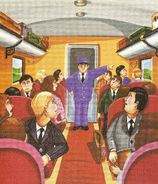 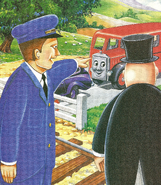 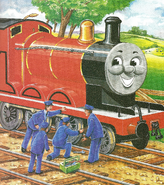 Add a photo to this gallery
Retrieved from "https://ttte.fandom.com/wiki/James%27_Traffic_Jam?oldid=1700142"
Community content is available under CC-BY-SA unless otherwise noted.