James is the first book in the Engine Adventures series.

James is a new mixed-traffic engine with shiny red paint who is sent to pull coaches with Edward. Edward warns James that coaches do not like being bumped, but James is too busy thinking about his smart paintwork to listen. When James and Edward pull into the station, James lets off steam and covers the Fat Controller in a shower of water. James steams quickly away and Edward tells him to slow down. James is going so fast that he and Edward steam straight past the platform at the next station. They have to back up to let the passengers off the train.

The next day, the Fat Controller goes to see James and tells him that if he does not behave better, he will have James painted blue. He then orders James to go and fetch his coaches, which James does not like one bit.

James collects his coaches and speeds away. James puffs his hardest, but finds himself going slower and slower until he comes to a complete stop. Upon inspection, it is revealed that he has made a leak in the brake pipe. The passengers and crew all get off the train and the leak is mended with the help of a passenger's bootlace. James knows he will be in big trouble now.

The Fat Controller sends James to the sheds in disgrace. James has to stay there all by himself. Then, one morning, the Fat Controller arrives and tells James he can pull trucks again. James is very pleased to be let out of the shed. 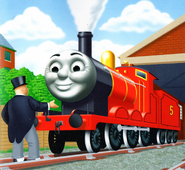 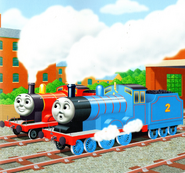 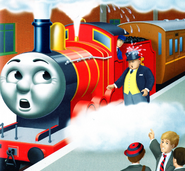 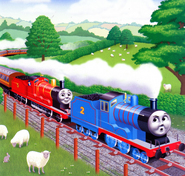 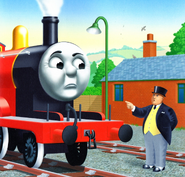 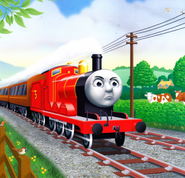 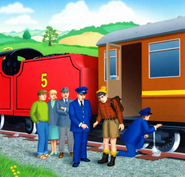 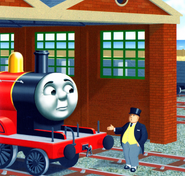 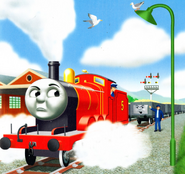 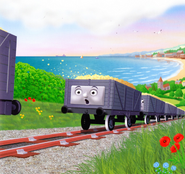 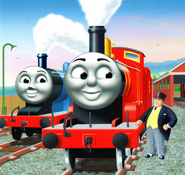 Add a photo to this gallery
Retrieved from "https://ttte.fandom.com/wiki/James_(Engine_Adventures)?oldid=1741568"
*Disclosure: Some of the links above are affiliate links, meaning, at no additional cost to you, Fandom will earn a commission if you click through and make a purchase. Community content is available under CC-BY-SA unless otherwise noted.