“I am sure people need warning of clanky old engines like you, but I am sure your silly rule does not apply to me!”
―James being rude to Edward

Railway Rules
James Breaks the Rules is a magazine story.

Engines have to whistle when they enter the yards to let the signalman and the workers in the yard know that they are coming - it is the rules. James does not think the rule applies to him and never whistles. One day, whilst returning from the harbour with some trucks, James is switched onto the loop and as a result, is late back at the yards. The signalman is sorry for the mistake but James admits he failed to whistle. James is scolded by The Fat Controller and decides that it is best to obey the rules in future. 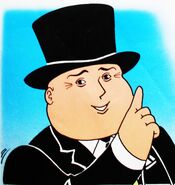 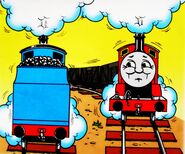 Retrieved from "https://ttte.fandom.com/wiki/James_Breaks_the_Rules?oldid=1806224"
*Disclosure: Some of the links above are affiliate links, meaning, at no additional cost to you, Fandom will earn a commission if you click through and make a purchase. Community content is available under CC-BY-SA unless otherwise noted.