James Works it Out

James Works it Out is a magazine story, illustrated using images from the television series.

Thomas, Stanley and James are getting ready to haul some trucks to Great Waterton. Stanley thinks James is the best shunter ever and James starts to show off. James shunts heavy Hector to the back of his trucks to show how good he is. Hector suggests that they check the weather with the yard manager before setting off. James ignores Hector; he does not take orders from a truck.

As James and Hector set off with their heavy train, it starts to snow. Harold flies by and warns James about the hazardous weather. Hector suggests they travel through Henry's tunnel, but James just ignores Hector.

Later, James meets Edward who warns that the tracks on the hill are slippery. Hector thinks James should ask Edward for help, but James still ignores Hector and puffs towards the hill. Hector can see the line ahead and can see that there is snow sliding onto the track; if James does not go fast enough, they will get stuck. Hector tells James to go faster, but James does not like taking orders from a truck and applies his brakes. James gets stuck in the snow drift. James is very sorry for not listening to Hector and the hopper truck tells James to reverse back up the hill and speed through the snow. James does this and manages to push the trucks through the snowdrift.

Finally, James and Hector arrive at Great Waterton just in time. Thomas says he had been worried, but James says that he was not; he had his friend Hector helping him out all the way. 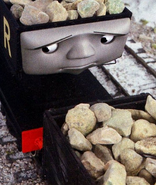 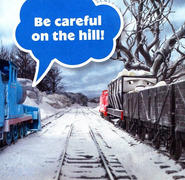 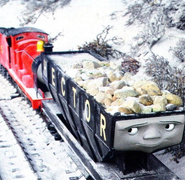 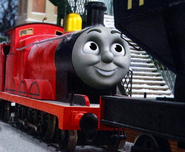 Add a photo to this gallery
Retrieved from "https://ttte.fandom.com/wiki/James_Works_it_Out_(magazine_story)?oldid=1696317"
*Disclosure: Some of the links above are affiliate links, meaning, at no additional cost to you, Fandom will earn a commission if you click through and make a purchase. Community content is available under CC-BY-SA unless otherwise noted.