James and the Bees

“It's a pity it's not Christmas, - we could call you James the Red-Nosed Engine!”
―The Vicar of Wellsworth

James and the Bees

14th August 2002
James and the Bees or James Goes Buzz is a magazine story illustrated using photographs from the television series.

James meets up with Trevor, who is enjoying his work at the Vicarage Orchard. James asks about a buzzing noise and Trevor explains that it is the bees that the Vicar keeps. Trevor is to take them to the station so they can make honey for the Vicar's friends. Just then, BoCo arrives and warns James not to let the bees sting him, but James just ignores BoCo.

Soon, James arrives at the station where a bee hive is to be placed on a train. Unfortunately, the hive falls and breaks open. The bees head towards James and one stings him on the nose. James tries to get rid of the bees by spinning on the turntable and having a wash, but the stubborn bees still cling onto his boiler. Soon, they give up and go back to find a new hive. The bees are soon safely in their new home and the Vicar thanks James. 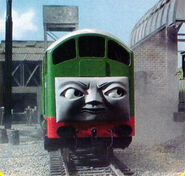