James and the Express

Thomas the Tank Engine
and Friends 6

James and the Express is a magazine story.

One night at the shed, Gordon and Henry tease James about the time a bootlace had to be used to get him out of his mishap with the coaches. But no matter how James tries to get his own back, they will not listen to him as Gordon tells him that he talks too much. He then boasts on that he is the only engine who can pull the express, as he pulls them for years and never loses his way as he has a special instinct. Every wise engine knows that the signalman works the points to make engines like Gordon run on the right lines, but Gordon is so proud he has forgotten about it.

The following morning Gordon wakes James up as it is time for him to arrange his coaches for him. James arranges the express without bumping them along the way, and Gordon, with much noise and blowing off steam, gets ready to couple on to the train where the Fat Controller and many important people are on board. Then Gordon starts as soon as he hears the guard's whistle blowing as he whistles goodbye to James, who watches the train disappears into the distance before getting back to work. Later as James fetches the coaches for another train, he hears a mournful noise; which turns out to be Gordon who tries to sidle into the station without being noticed.

James wonders if Gordon had lost his way, although Gordon says that it was lost for him as he was switched on to the loop line by mistake, and he had to go all round and back again. No sooner that the passengers are getting so cross when the Fat Controller promises them a new train at once, and asks James if he would like to pull the express for him. In no time, James is coupled on to the train, and puffs smoothly out of the station. Along the line, the passengers cheer on as James pulls them into the station on time. The Fat Controller praises James for his impressive efforts in pulling the express.

From that point on Gordon and James are now good friends, and James sometimes takes the express to give Gordon a well deserved rest. Gordon never teases James about bootlaces anymore. 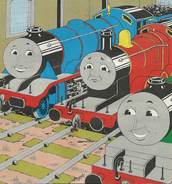 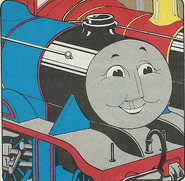 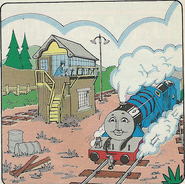 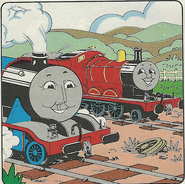 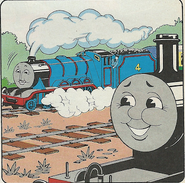 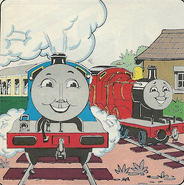 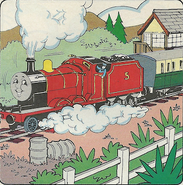 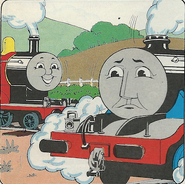 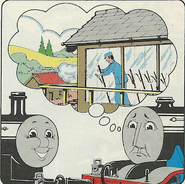 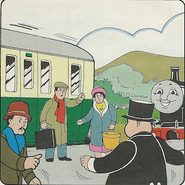 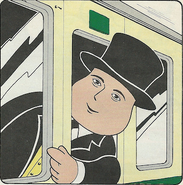 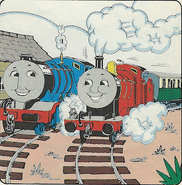 Add a photo to this gallery
Retrieved from "https://ttte.fandom.com/wiki/James_and_the_Express_(magazine_story)?oldid=1784532"
*Disclosure: Some of the links above are affiliate links, meaning, at no additional cost to you, Fandom will earn a commission if you click through and make a purchase. Community content is available under CC-BY-SA unless otherwise noted.