“And that balloon is red! I am the best and most splendid red engine on Sodor. It wouldn't be so bad if it was a blue balloon...”
―James

James and the Red Balloon

2004
James and the Red Balloon is a magazine story, it was illustrated by using photographs from the television series.

One day, Percy enquires about a load Thomas is hauling. Thomas explains that it is a balloon. Percy thinks it is a party balloon and asks if they are invited to the party, but Thomas explains that it is a huge hot-air balloon which will take people on trips around Sodor. Just then, James puffs up; he had overheard Thomas' explanation and is cross. He states that passengers should travel around the island in railway carriages and not in hot-air balloons. After hearing James, Thomas does not feel excited about the balloon any more and instead feels worried.

Next day, Thomas, Percy, James and all of the other engines are watching the big red balloon rising into the sky. At the station, all of the passengers are impressed by the balloon and they decide they would like to have a ride in it.

Later, James and Thomas are having a chat while waiting at the level crossing. They are both still very concerned about the balloon stealing their passengers. Just then, something big and red drifts right over them and lands on top of James. It is the balloon. James is so scared that he lets out a big burst of steam. The steam fills the balloon and it drifts back up into the sky. James' driver praises him, but James is not happy - he did not want to help the balloon. Throughout the day, James sees the balloon wherever he goes and it is always full of passengers. James feels sure that he should be carrying those people.

When James returns to the station, the Fat Controller thanks him for helping the hot-air balloon. Then the Fat Controller tells James that the balloon is bringing a lot of visitors to Sodor and that James will be extra busy carrying people to the airfield. That night, James shares the good news with the other engines. He goes to sleep dreaming about learning to fly. 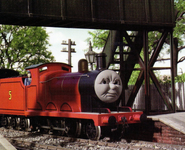 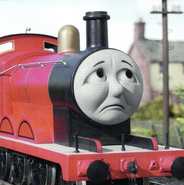 Add a photo to this gallery
Retrieved from "https://ttte.fandom.com/wiki/James_and_the_Red_Balloon_(magazine_story)?oldid=1972268"
*Disclosure: Some of the links above are affiliate links, meaning, at no additional cost to you, Fandom will earn a commission if you click through and make a purchase. Community content is available under CC-BY-SA unless otherwise noted.