Ernest John "Johnny" Morris (20 June 1916 - 6 May 1999) was a British children's television presenter and writer who was the first narrator of The Railway Stories.

He narrated The Three Railway Engines through Percy the Small Engine, recorded by Delyse Records during 1961-1966. He also built upon the Reverend W. Awdry's style of repetitions, improvising and enhancing the recordings with whistles, puffs, chugs and bursts of steam.

Johnny Morris also did books 1-8 for cassette, but he did books 9-11 only for Delyse Records, Willie Rushton later re-narrated books 9-11. He also narrated some films about Flying Scotsman in its early years of preservation, and was the vice president of the Bluebell Railway from the 1960's until 1987. Morris also appeared in "Animal Magic" and narrated "Tales of the Riverbank". 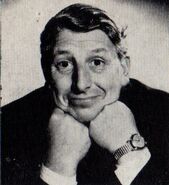 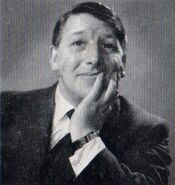 Add a photo to this gallery
The Railway Series
Retrieved from "https://ttte.fandom.com/wiki/Johnny_Morris?oldid=1686184"
*Disclosure: Some of the links above are affiliate links, meaning, at no additional cost to you, Fandom will earn a commission if you click through and make a purchase. Community content is available under CC-BY-SA unless otherwise noted.