William "Junior" Campbell (born in Glasgow, Scotland on 31 May 1947) is a Scottish composer, songwriter and musician. He was the co-composer for Thomas the Tank Engine & Friends with Mike O'Donnell from its debut in 1984 until 2003, and TUGS. He was also a founder member, lead guitarist, piano player and singer the Scottish band "Marmalade", formerly "Dean Ford and the Gaylords", from 1961 to 1971.

As a youngster in Glasgow, Campbell had a unique style of guitar playing, whereby he played left-handed, with the strings upside down, right hand strung - tuned to "open E".

He joined Pat Fairley to form "Dean Ford and the Gaylords" later to become "The Marmalade", on his fourteenth birthday in May 1961. With "The Marmalade" he co-wrote and produced the multi-million selling hits "Reflections of My Life", "Rainbow" and "I See the Rain", amongst others, in a long line of world chart hits from 1967 to 1971. Campbell's guitar solos on "Reflections of My Life" and "I See the Rain" are particularly outstanding; the latter was named Jimi Hendrix's favourite cut of 1967.

Tired of touring, Campbell left "The Marmalade" in March 1971.

During the 1970's, Campbell released two solo records, "Hallelujah Freedom", and "Sweet Illusion", both of which made top-10 chart appearances in the UK Singles Chart. He studied orchestration and composition with Eric Guilder and Max Saunders at the RCM, and became an arranger and producer for many artists, including Barbara Dickson.

At some point Campbell and Mike O'Donnell signed to the same publisher, and their partnership sparked. They have collaborated on writing television jingles, which continued even after leaving their bands.

Campbell has composed music for television and film, including the 1994 BAFTA-winner "Taking Over the Asylum", starring David Tennant and Ken Stott, and the 1998 adaptation of the highly acclaimed BBC Worldwide Minette Walters murder mystery "The Scolds Bridle".

Campbell currently lives in Sussex with his wife Susie, and has three children and three grandchildren. 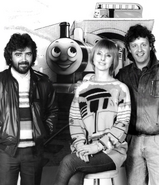 Mike and Junior at Shepperton Studios

Campbell with the rest of the Season 1 crew

Junior Campbell (2nd from right) and the rest of "The Marmalade" 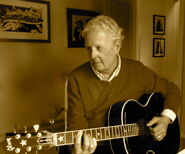 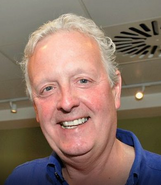 Deutsch Español עברית 日本語 Polski Русский
*Disclosure: Some of the links above are affiliate links, meaning, at no additional cost to you, Fandom will earn a commission if you click through and make a purchase. Community content is available under CC-BY-SA unless otherwise noted.
Advertisement