Kelly is a mobile crane, who works for the Sodor Construction Company. He is the oldest member of the Pack and originally belonged to Miss Jenny's father.

Kelly was one of the first members of the Pack that Jack met, and he and Isobella both advised him to see the Foreman. A while later, he attempted to try and help Jack hold up a bridge that was collapsing, but by the time he had rushed over to the bridge, it had already collapsed.

Later, Kelly told the story of the One-eyed Truck to Percy and the rest of the Pack. Kelly also gained a fear of strong winds after an accident in which he was blown over, but he got over this fear after he rescued Isobella from falling off the Old Quarry Bridge. When Max and Monty carelessly crashed into the lightning tree, he, Alfie and Oliver hold the tree up while Jack goes to fetch the props and the tree is saved. He later helped with the restoration of Great Waterton.

Kelly is good at heart and gets along with everyone. He is especially good friends with Isobella. He is seen by many as the team's leader, and is usually given the most dangerous work to do. He will not be rushed and understands that work of this kind takes extreme care. Kelly used to have a slight fear of strong winds, but he conquered that fear when he rescued Isobella. 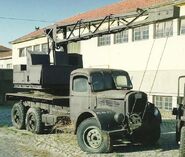 Kelly's possible basis
Add a photo to this gallery

Sodor Construction Company
Non-rail vehicles
* RWS only | ** T&F only | *** Other Media only
Retrieved from "https://ttte.fandom.com/wiki/Kelly?oldid=1735044"
*Disclosure: Some of the links above are affiliate links, meaning, at no additional cost to you, Fandom will earn a commission if you click through and make a purchase. Community content is available under CC-BY-SA unless otherwise noted.