Kenji is an upcoming character who will appear in the twenty-fourth series.

Kenji first arrived on Sodor via The Rail Ferry at Brendam Docks, from which he was transported to Ulfstead Castle by Gordon and Rebecca. Electrical wires were set up especially for him around the Estate Railway.

Kenji was publically revealed on the first night of The Technology Fair, where he impressed both the crowd and the other engines. After his first run with his passenger coach, he met up with Thomas and talked to him about his around-the-world trip and his Japanese friend, Hiro.

Later, when Baz and Bernie stole the plans to Ruth's Hover-Car, they stole Kenji to be their getaway vehicle in place of Sonny. Due to the lack of overhead wires on The Main Line, Kenji was gradually slowed down until Thomas brought him to a stop.

Kenji is based on a 0 series Shinkansen, also known as a "Bullet Train". These were the first generation of such engines and were designed specifically to run the high-speed Tōkaidō Shinkansen line in Japan. By 2008, all units had been withdrawn from active service, however a large number are preserved, including one at the National Railway Museum in York.

Kenji's basis
Add a photo to this gallery 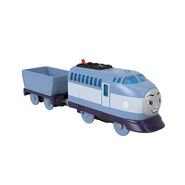 Motorized
Add a photo to this gallery

International Characters
* RWS only | ** T&F only | ✦ Changed location
Retrieved from "https://ttte.fandom.com/wiki/Kenji?oldid=1758402"
*Disclosure: Some of the links above are affiliate links, meaning, at no additional cost to you, Fandom will earn a commission if you click through and make a purchase. Community content is available under CC-BY-SA unless otherwise noted.