Paul Kevin Jonas II is an American singer, member of the pop group, The Jonas Brothers and narrator of Caribu books.

Kevin Jonas was born on 5 November 1987 in Teaneck, New Jersey to Denise and Paul Kevin Jonas Sr. He is the oldest of four brothers. After performing with his brothers Joe and Nick in the 2005 song "Please Be Mine", Columbia Records' president, Steve Greenberg after listening to the song loved it and signed them onto a record label. The brother's named the band the "Jonas Brothers", and the band went on to become popular musicians and actors. He married Danielle Deleasa in 2009. After the group split, Jonas became an actor. A year later, he had his first child, Alena, and a second child, Valentina, in 2016. In 2019, the group reunited and released their new single, "Sucker" on 1 March 2019. He narrated Railway Series stories for Caribu in 2020. 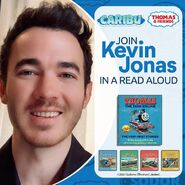 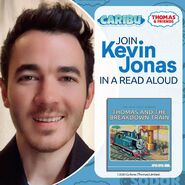 Deutsch
*Disclosure: Some of the links above are affiliate links, meaning, at no additional cost to you, Fandom will earn a commission if you click through and make a purchase. Community content is available under CC-BY-SA unless otherwise noted.