2 (T&F)
Killaban is a village located south of Cronk and southwest of Killdane. It only appeared in Thomas and the Magic Railroad.

Killaban is named after the 6th Century missionary of the Iona School, Saint Abban. Like St. Luoc, he landed in Suddery Bay, but on the eastern shore. It is doubtless he made here, as well as Kellaby, his headquarters. The church here is dedicated to him, and Sudrian historian Canon Nicholas Dreswick served as Vicar there from 1901 to 1919.

Killaban is served by a railway station which is on the Main Line Loop. The station consists of two platforms, with the northern platform having the station building, and with three lines passing through. Jem Cole's Yard is located here.

Thomas once had to take a train here to connect with Gordon's express, though the former was late. The two discussed this, as well as Mr. Conductor's impending visit to Sodor, when Diesel 10 raced through the station, frightening both engines and Annie and Clarabel.

The bend just after the station

The bridge just before the station 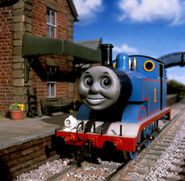 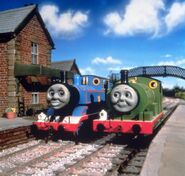 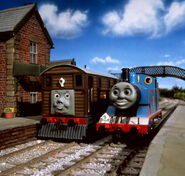 The station building next to Cranky

The station building at the Sodor Ironworks

Killaban's model reused from Maithwaite
The Main Line Loop
Español עברית Русский
*Disclosure: Some of the links above are affiliate links, meaning, at no additional cost to you, Fandom will earn a commission if you click through and make a purchase. Community content is available under CC-BY-SA unless otherwise noted.
Advertisement