“Let's make him call us 'Your Majesty'!”
―James planning to tease Thomas

King Thomas is a magazine story.

One night, the Fat Controller tells the engines some stories about the Kings of England. Henry is proud that there have been eight kings named Henry, James and Edward are pleased to have royal names too. Thomas does not share his name with royalty and the other engines think they are more important than he. Next morning, Thomas is tasked with taking some wood to the building site of a new cinema called "The Crown" . When there, Thomas waits patiently in a siding next to the cinema. On the roof, two workmen were carrying a wooden crown to hang above the cinema's name. Suddenly, a gust of wind blows it out of their hands and rolls it across the roof. It then lands, and becomes jammed, on Thomas' funnel.

Back at the yard, Henry, James, and Edward are waiting to tease Thomas again. But they get a huge shock when Thomas rolls in wearing a giant crown. The engines apologise, but Thomas makes sure that they call him "King Thomas" until the crown is removed. 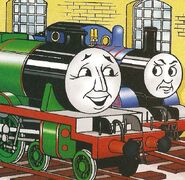 Add a photo to this gallery
Retrieved from "https://ttte.fandom.com/wiki/King_Thomas?oldid=1770382"
*Disclosure: Some of the links above are affiliate links, meaning, at no additional cost to you, Fandom will earn a commission if you click through and make a purchase. Community content is available under CC-BY-SA unless otherwise noted.