Krystyna is a small boat that only appeared in the second series episode Percy Takes the Plunge.

Its name is painted in white on its hull, and "Harbour" is painted on its broadside and rear. The Fat Controller used Krystyna in order to reprimand Percy when the trucks pushed him into the sea. 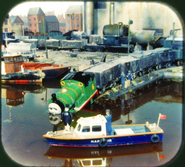 Add a photo to this gallery
Non-rail vehicles
* RWS only | ** T&F only | *** Other Media only
Retrieved from "https://ttte.fandom.com/wiki/Krystyna?oldid=1700650"
Community content is available under CC-BY-SA unless otherwise noted.