Lakeside is a station on the northern end of the Skarloey Railway, reached by a loop line. Excluding stock footage, it only appeared in Series 4.

In 1963, the Skarloey Railway began preliminary work to construct a loop around Skarloey Lake. The loop line was completed in time for the railway's Centenary Celebrations in June 1965. It deviates from the main line at Lakeside Junction, and runs round and above the lake on a ledge cut in the hillside among the trees. Lakeside is the sole station on the line, and serves a picnic area. The loop was mostly financed by the sale of the old Ward Fell slate quarry to the Ministry of Defence.

The loop line has proved its worth as a succesful tourist attraction. From Easter to Christmas all passenger trains between 10.30am and 4.00pm run round the lake through magnificient scenery; but for the rest of the year, when traffic is mainly local, the old main line direct to Skarloey station is used.

Lakeside is a sizeable community situated around the mouth of the lake, and has a harbour which houses a variety of fishing boats, and the paddle tug Lakesider III. The railway runs through the town in a loop, and a bascule bridge carries it across the lake. The station consists of two platforms and a separate ticket office. A variety of businesses are located here, such as a Neptune Refreshments shop owned by the Refreshment Lady.

Duncan at Lakeside
Add a photo to this gallery

Skarloey and Rheneas at Lakeside Junction

The Mail Van going over the road bridge at Lakeside 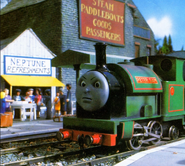 Nant Gwernol, the basis for Lakeside
Add a photo to this gallery
Skarloey Railway
* RWS only | ** T&F only
Retrieved from "https://ttte.fandom.com/wiki/Lakeside?oldid=1776560"
*Disclosure: Some of the links above are affiliate links, meaning, at no additional cost to you, Fandom will earn a commission if you click through and make a purchase. Community content is available under CC-BY-SA unless otherwise noted.