“I much prefer pulling trains through the hills when the leaves are still on the trees and not on the tracks!”
―Peter Sam

Leaves on the Line

Leaves on the Line is a magazine story.

One autumn, Peter Sam is taking a scenic tour train through the hills. However, one week later, the scenic train stops running and Peter Sam cannot think why until he leaves the shed to collect his carriages. There is strong wind and light rain which makes everything look dull and brown. All of the colourful leaves on the trees have disappeared. Duke warns Peter Sam to be careful of leaves on the line at the hill. Peter Sam thinks Duke is just being bossy. Peter Sam is sure that he does not need help on hills.

As Peter Sam begins to climb a steep hill, the wind whips the leaves off the trees and onto the line. Peter Sam's wheels cannot grip the rails. They spin round and round until Peter Sam starts to slip backwards down the hill. Try as he might, Peter Sam cannot make it up the hill. Eventually, Peter Sam is too tired to even move. At the bottom of the hill, Peter Sam's driver sends the fireman to fetch Duke for help.

Luckily, wise old Duke soon arrives. The fireman puts sand on the line to help the wheels grip and, together, the two engines start up the hill with all their might. Eventually, the train reaches the top of the hill. Peter Sam is very grateful and thanks Duke for his help. Peter Sam decides that he prefers the leaves on the trees than on the tracks. 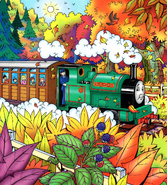 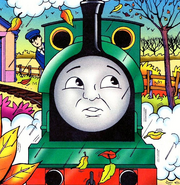 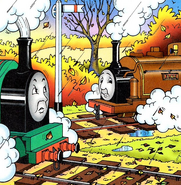 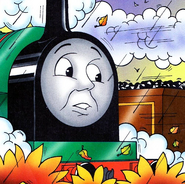 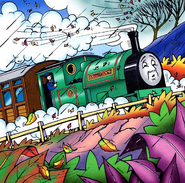 Add a photo to this gallery
Retrieved from "https://ttte.fandom.com/wiki/Leaves_on_the_Line_(magazine_story)?oldid=1229292"
Community content is available under CC-BY-SA unless otherwise noted.