“All the engines are so useful!
What we sang before was wrong!”
―The trucks

Left Alone is a read and colour rhyming magazine story.

The trucks are being very troublesome, singing a rude song about steam and diesel engines. The engines decide that something needs to be done.

As Fergus collects the trucks, they laugh at his tall funnel. To teach them a lesson, Fergus decides to leave them in a tunnel. It is cold and damp inside the tunnel and the trucks plead to the engines to let them out. The engines hear them, but pretend they do not.

Eventually, Fergus pulls the trucks out. Now the trucks sing a different song about the engines being really useful. 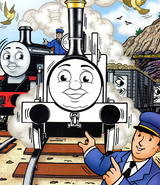 Add a photo to this gallery
Retrieved from "https://ttte.fandom.com/wiki/Left_Alone?oldid=1696751"
*Disclosure: Some of the links above are affiliate links, meaning, at no additional cost to you, Fandom will earn a commission if you click through and make a purchase. Community content is available under CC-BY-SA unless otherwise noted.