Little Engines Can Do BIG Things

Little Engines Can Do BIG Things is a book.

Thomas wants to be a really useful engine, but James teases Thomas for bumping the buffers and Gordon scolds Thomas for being late, making him feel unimportant. Later Thomas is shunting trucks of coal for Henry and one of the trucks goes through the buffers. Thomas tells this to Percy who suggests that they are the magic buffers that lead to a mysterious engine called Lady. Thomas goes through the buffers and sees the coal truck and picks it up. Thomas reaches the end of the line and sees a world he has never seen before. He sees Lady and gives her some coal. Then Thomas and Lady travel back to Sodor using The Magic Railroad. The railroad is coming back to life. Once they are back on Sodor all the engines cheer for Thomas. 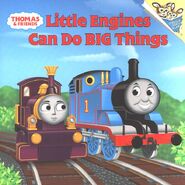 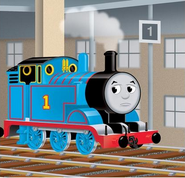 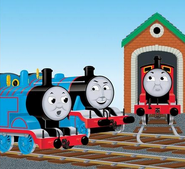 Add a photo to this gallery
Retrieved from "https://ttte.fandom.com/wiki/Little_Engines_Can_Do_BIG_Things?oldid=1881207"
*Disclosure: Some of the links above are affiliate links, meaning, at no additional cost to you, Fandom will earn a commission if you click through and make a purchase. Community content is available under CC-BY-SA unless otherwise noted.