These four-wheeled coaches originate from the Liverpool and Manchester Railway. They have been seen on the Sodor and Mainland, Estate, and North Western Railways.

There are at least three coaches which are used by Stephen and Glynn to carry passengers around Ulfstead Castle. James and Diesel have also once pulled the coaches. Duck also shunted some of them once. Toby also used them when he helped out on the estate railway.

The coaches are based on the Liverpool and Manchester Railway Traveller Coach. Two of them, replicas, now work with the Stephenson's Rocket replica at the National Railway Museum.

The coaches' basis
Add a photo to this gallery

In the Railway Series, the coaches' livery are painted dark yellow and black, and appear to have "S&M" written on their sides in yellow and red lettering.

In the television series, these coaches are painted dark blue and cream with gold lining, as well as Sir Robert Norramby's crest on their sides. The wheels are black with blue lining.

A Liverpool & Manchester Railway coach in the television series

The interior of a coach

The windows and doors of a coach

The back of a coach 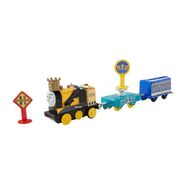 Motorized Railway
Add a photo to this gallery

North Western Railway
* RWS only | ** T&F only | --- Dropped
Ulfstead Castle
Sodor & Mainland Railway
United Kingdom
* RWS only | ** T&F only
Retrieved from "https://ttte.fandom.com/wiki/Liverpool_and_Manchester_Railway_Coaches?oldid=1765673"
*Disclosure: Some of the links above are affiliate links, meaning, at no additional cost to you, Fandom will earn a commission if you click through and make a purchase. Community content is available under CC-BY-SA unless otherwise noted.