Logan and the Big Blue Engines

Sodor Island Publishing
Logan and the Big Blue Engines is a book that came with the Wooden Railway set of the same name and in a special book pack.

The engines have special jobs on the day of the Sodor Talent Show. A little steam shunter that looks like a diesel is introduced, and his name is Logan.

Gordon's first job is to collect the Brass Band. Edward's is to collect some bubble fluid for Mr. Bubbles, but first, the engines need some coal.

Edward and Gordon go to the Crosby Coal Company to collect their coal and their cargo where they find Logan, busy shunting their trucks. Since Logan has not seen Edward and Gordon before, he can't tell their tenders apart and gives the wrong trucks to each engine. Edward leaves with Gordon's brass band coaches and Gordon leaves with Edward's bubblesome trucks.

Gordon leaves with the bubblesome trucks and Logan now realises his mistake. When he puffs alongside Edward, thinking he is Gordon, he is shocked to find none other than Edward! Logan wants to put things right.

Logan, with the brass band coaches, eventually catches up to a confused Gordon where he warns him about his mistake. Gordon stops, and is coupled up to the correct trucks. Logan and Gordon have a friendly chat and Gordon learns that Logan is a really useful steamie, not a diesel. Logan returns to his work at his coal mine a wiser engine that learned the value of patience. 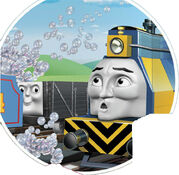 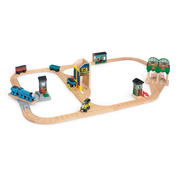 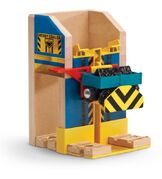 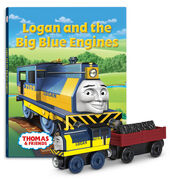 Expansion Pack
Add a photo to this gallery
Retrieved from "https://ttte.fandom.com/wiki/Logan_and_the_Big_Blue_Engines?oldid=1834597"
*Disclosure: Some of the links above are affiliate links, meaning, at no additional cost to you, Fandom will earn a commission if you click through and make a purchase. Community content is available under CC-BY-SA unless otherwise noted.