Lord Callan is the lord of Callan Castle and its surrounding land, including the infamous Black Loch. He lives at Callan Castle, where he often holds special events and celebrations.

When Callan Castle was being reopened to the public, Lord Callan planned to have a special celebration for the grand opening. For this, he ordered bunting and banners to be delivered to the castle so it could be decorated. Donald and Douglas were both put in charge of delivering the train to Callan Castle, but they became stuck overnight when their line was blocked. Thankfully, they managed to get to the castle safely.

Lord Callan later took a ride on Hugo when he first arrived on the Island.

Lord Callan wears a black jacket with silver jewels on it and a white undershirt and a blue, white and red kilt.

Lord Callan with Donald, Douglas and Sir Topham Hatt in the seventh series

Lord Callan in the eleventh series

Lord Callan with the Duke of Boxford 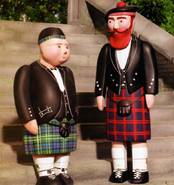 Lord Callan in a magazine story

Lord Callan in a magazine story with his dog, Dougal 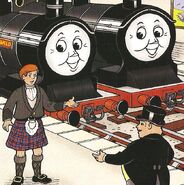 Add a photo to this gallery
Misty Valley Branch Line
Retrieved from "https://ttte.fandom.com/wiki/Lord_Callan?oldid=1722571"
*Disclosure: Some of the links above are affiliate links, meaning, at no additional cost to you, Fandom will earn a commission if you click through and make a purchase. Community content is available under CC-BY-SA unless otherwise noted.