“For once, it's lucky that something wasn't found again!”
―Thomas

Lucky to be Lost!

Lucky to be Lost! is a magazine story.

It is the day before the main station Christmas party, but things keep getting lost. First, Thomas' driver's cap is blown away until Percy's guard spots the cap in a tree and rescues it. Meanwhile, at the main station, some decorations go missing. They are later found at the lost property office. A sack of Christmas post has disappeared, too. Luckily, it is discovered in the wrong mail van.

Later, Thomas takes on some water at Wellsworth, but his brakes slip and Thomas rolls forwards, sending water over a startled passenger on the station platform. The passenger is furious and says he intends to complain to the Fat Controller.

The next day, Thomas sees the man again. His van has broken down on the way to deliver food for the main station's party. Thomas offers to take the man and his delivery. Everyone is pleased when Thomas and the man turn up.

The delivery man stays to enjoy the party and tells Thomas that he was glad he did not post his complaint yesterday and that he has lost it anyway. For once, Thomas is glad that something lost was not found again. 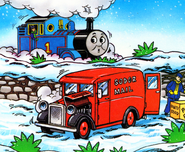 Add a photo to this gallery
Retrieved from "https://ttte.fandom.com/wiki/Lucky_to_be_Lost!?oldid=1696775"
*Disclosure: Some of the links above are affiliate links, meaning, at no additional cost to you, Fandom will earn a commission if you click through and make a purchase. Community content is available under CC-BY-SA unless otherwise noted.