Nia and the Unfriendly Elephant (T&F)

Luke is a green Irish narrow gauge saddle tank engine who works primarily at the Blue Mountain Quarry, on the Skarloey Railway.

Luke arrived on Sodor from Ireland. It had always been his dream to come to Sodor and he was very excited to work there. He arrived on Sodor alongside Victor, who at the time was painted yellow and did not speak English. When the ship docked, Luke was so eager to get to work that he begged the workmen to take him off the ship first. However, as he was being unloaded, he accidentally bumped into Victor, knocking him off the ship and into the sea. Luke was then taken to the Steamworks to be repaired.

Victor would eventually be recovered and given a permanent home at the Steamworks, but Luke was not aware of this. He believed that Victor had been sent to the Smelter's Yard to be scrapped and blamed himself for the accident due to his impatience. When he arrived at the Blue Mountain Quarry, he told the narrow gauge engines about what had happened. The engines feared that if the Fat and Thin Controllers found out about what Luke had done, they would send him away. As a result, they allowed Luke to stay at the quarry, where he remained hidden from view.

This all changed one day when Thomas was called in to replace Paxton at the quarry after the diesel was in need of repairs. He encountered Luke a few times during his second day there, although the other engines denied knowing anything about him. Eventually, Skarloey relented and told Thomas about Luke, although he refused to explain what Luke had done and warned Thomas not to tell anyone.

Luke eventually warmed up to Thomas after he saved Skarloey from an accident with Rocky. The two quickly became friends and Luke finally admitted to Thomas what he had done. Determined to help Luke, Thomas decided to search for the "yellow engine" in Luke's story. He eventually learnt the engine's identity as Victor and that the chains that had held him to the ship were broken at the time.

Thomas rushed to tell Luke about what he had learnt, but the narrow gauge engines mistakenly assumed he had broken his promise. As they retreated to the higher levels of the quarry, Thomas desperately tried to follow them. He even travelled on the narrow-gauge lines, which resulted in him nearly falling off a cliff. Luke managed to save Thomas and rekindled his friendship, before learning moments later from Victor (who Thomas had told Paxton to bring to the quarry) the true events of the incident. Realising that it was only an accident and that Victor had not been scrapped, Luke finally felt happy and was accepted into the narrow gauge fleet by the Thin Controller.

Luke later befriended a young deer which was found at the Blue Mountain Quarry. Knowing that the deer did not belong at the quarry, he released it back into the wild at Ulfstead Castle. Another time, he traded jobs for a day with Millie there.

One Christmas, he had to pull a flatbed with a Christmas tree, but got stuck on a hill and had used up all of his sand. Duncan - who was travelling behind - was annoyed and when some of the trees hit his face, he complained to Luke. However, when Duncan realised that he had hurt Luke's feelings, he readily helped Luke by pushing him up the hill.

Luke is a plucky little pea-green tank engine on the Skarloey Railway, brought to Sodor from a neighbouring land. For a long time, he hid in fear and deep shame in the tunnels and caverns of the Blue Mountain Quarry from a terrible, dark secret, only in the knowledge of the other narrow gauge engines, believing that he had caused a Yellow Engine to fall into the sea. Fortunately, he befriended and trusted Thomas, who investigated and realised the yellow engine was Victor and that the accident had not been Luke's fault, managing to clear his name. Luke is a gentle, sensitive soul and is bubbling with enthusiasm, keen to work as part of the team. Like many engines, there are times when he may want to run away and be left alone and he may not be quick to stick up for himself either, but when there is someone in need, Luke is passionate about showing how much he values his friends and will bravely heave into action without a second thought.

Luke is based on the Kerr Stuart 0-4-0ST Wren Class No. 4256 "Peter Pan", built in 1922. "Peter Pan" has been preserved and is based at the Leighton Buzzard Railway. Luke has an added closed cab and buffers, and has been regauged from 2ft to 2ft 3in. 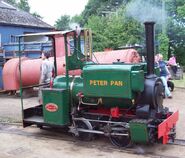 Luke is painted pea green with white lining. His name is painted in white on either side of his saddle tank, and he has brass and black number plates on both sides of his cab.

In Blue Mountain Mystery in the mobile app, Read and Play!, Luke is incorrectly portrayed with Percy's whistle.

Skarloey Railway
* RWS only | ** T&F only
Español Français עברית 日本語 Polski Русский 中文
*Disclosure: Some of the links above are affiliate links, meaning, at no additional cost to you, Fandom will earn a commission if you click through and make a purchase. Community content is available under CC-BY-SA unless otherwise noted.
Advertisement