Thomas the Tank Engine Wikia
Register
Don't have an account?
Sign In
Advertisement
in: Märklin, Organisations, Merchandise,
and 5 more
English

Sometime in 1859
Märklin is a German model train manufacturer. Components from its Gauge 1 models were used to construct the engines in the television series, and an HO scale 4-wheel passenger coach was used as the base for The Quarryman's Coach on the Rev W. Awdry's Ffarquhar layout.

They also released a limited range of Thomas & Friends merchandise in HO scale which were the Hornby models with Märklin compatible couplings and pickup shoes to work on Märklin's C track using third rails. Due to licensing reasons, they were only available in Germany, Austria and Switzerland, although they did leak out to other countries (non-German speaking nations). The range was only released in 2006 and discontinued shortly afterwards.

Märklin's HO Thomas & Friends series is based on the following Hornby models:

The following Märklin's Gauge 1 models and parts were used in the production of the television series:

The BR 80 was mainly used during the first series for scenes where rolling stock passed by. The BR 80 would usually pull trucks whenever moving goods trains were supposed to be seen on-screen. As production of the series moved on and more characters were introduced, they would be used for the goods train movements, which meant the BR 80 was retired from its original purpose. This engine also provided various components for a few engines (chassis, bufferbeams, buffers, smokebox door and bell)

The BR 80 was used as source of parts for Percy, Toby, Bill, Ben, City of Truro, Diesel, Daisy, BoCo and Mavis

Much like the BR 80, the BR 55 would also provide various components for many engines during production. The entire chassis was modified where needed to be suitable for each size of engine that used it. It was the least changed for James, moderately altered for Edward and heavily modified for Thomas as his chassis was made to fit the existing body made for the pilot. The bufferbeams were also used for many of the engines with most only using one set from either the front or back.

The BR 55 was used as a source of parts for Thomas, Edward, James, Percy, Toby, Duck, Donald and Douglas

The BR 78 played a crucial role in terms of providing components. It had a bigger chassis than the BR 80 and BR 55, meaning it could be used for bigger engines such as Henry and Gordon along with Oliver who's drive wheels were too large for the smaller donors to provide.

The BR 78 was used as a source of parts for Edward, Henry, Gordon, Percy and Oliver

The Quarryman's Coach, which has an HO scale 4-wheel passenger coach with as a base with added balconies

A track in the first series

The end railing of a Märklin DHG 500 diesel 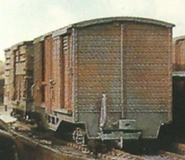 Deutsch Español עברית 日本語
*Disclosure: Some of the links above are affiliate links, meaning, at no additional cost to you, Fandom will earn a commission if you click through and make a purchase. Community content is available under CC-BY-SA unless otherwise noted.
Advertisement