Thomas and the Forest Engines (T&F)

Thomas and the Forest Engines (T&F)

Marcia and Marcio the Forest Engines

Marcia and Marcio are two wood-burning tender engines who work on the Eucalyptus Railway in Brazil.

Thomas first met Marcia and Marcio while he was collecting eucalyptus wood from the Plantation for Gabriela. When the two expressed a desire to explore beyond their home railway, Thomas offered to swap jobs with them for the day.

During their journey to Guanabara Bay, Marcia and Marcio both ran out of eucalyptus wood multiple times, meaning they had to use the supplies on their flatbeds. When these eventually ran out, they were stranded in the Amazon Rainforest.

Eventually, with the help of Emerson, Thomas found the pair and collected some more eucalyptus wood for them to complete their journey with. After delivering the wood to the docks, Marcia and Marcio returned to their home on the Eucalyptus Railway. [1]

Marcia and Marcio are twins and often work together. They have a habit of talking simultaneously, which can be confusing when introducing themselves to new engines. The two love their home railway, though they long to be able to see more of the world.

Marcia and Marcio are based on the Associação Brasileira de Preservação Ferroviária (ABPF) wood-burning engine No. 215 Maria Fumaça, built in 1912 by Baldwin Locomotive Works in the United States and exported to Brazil.

Marcia and Marcio have been partially modified from their original basis. No. 215 was designed and built to run on metre gauge rails, whereas Marcia and Marcio are standard gauge. Additionally, they have been fitted with buffers and screw-link couplings, allowing them to work with British rolling stock.

Marcia and Marcio's basis
Add a photo to this gallery

The back of Marcia's cab 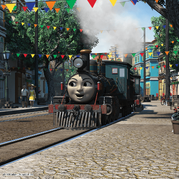 Brazil
International Characters
* RWS only | ** T&F only | ✦ Changed location
Retrieved from "https://ttte.fandom.com/wiki/Marcia_and_Marcio?oldid=1878975"
*Disclosure: Some of the links above are affiliate links, meaning, at no additional cost to you, Fandom will earn a commission if you click through and make a purchase. Community content is available under CC-BY-SA unless otherwise noted.