Margaret Emily Awdry (née Wale; 24 July 1912-22 July 1989) was the wife of Wilbert Awdry and the mother of Christopher, Veronica, and Hilary. It was she who urged her husband, and later her son, to submit the stories they had written for publishing.

She met Wilbert Awdry in Jerusalem, where he was teaching at St. George's School; they moved back to England in 1936 and were married two years later. She had suggested to Wilbert Awdry that he should publish The Three Railway Engines after he had written the book for his son Christopher Awdry.

She makes a cameo in the third illustration of Percy Runs Away with her husband and their children on a platform when Percy passes by with some trucks.

Margaret passed away in 1989, due to a fatal heart attack. 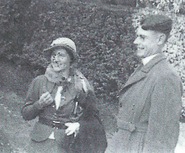 Margaret and her family at Bredhurst in August 1948

Margaret and her family at Emneth Church in 1965

Wilbert and Margaret Awdry on their 50th Anniversary

Margaret and her family in Percy Runs Away 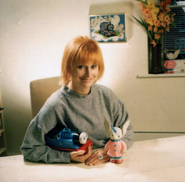 Behind Britt Allcroft is a Thomas tapestry made for her by Margaret
Deutsch Español עברית 日本語 Polski Русский
*Disclosure: Some of the links above are affiliate links, meaning, at no additional cost to you, Fandom will earn a commission if you click through and make a purchase. Community content is available under CC-BY-SA unless otherwise noted.
Advertisement