“I absolutely love the job. It's such an iconic character and we've all grown up with him.”
―Mark Moraghan on his storytelling role, Good Morning Britain

Mark Stephen Moraghan (born on 27th January 1963) is a British actor, voice actor and singer. He was the final narrator for Thomas & Friends in the UK and the US prior to the series switching to first-person narration by Thomas.

He was hired as narrator in 2012, and held the role from the seventeenth to twenty-first series (replacing Michael Angelis and Michael Brandon, respectively). He also re-narrated the thirteenth series episode Snow Tracks specially for the DVD Santa's Little Engine in the US, as well as re-narrating shortened versions of the fourteenth series episodes, Charlie and Eddie and Thomas' Crazy Day and the fifteenth series episodes, Up, Up and Away! and Percy's New Friends for the PBS Kids website. Moraghan also provides the voice-over for the Read and Play! app as well as some others. When the role of the narrator was scrapped after the twenty-first series, it was announced that Moraghan would continue working on the series, narrating tie-in content and voicing characters in "Thomas & Friends: Big World! Big Adventures!”, starting with Dexter. He also replaced the late Ben Forster with Storytime Segments, playing Mr. Evans. In 2020, he reprised his role as the narrator for the Thomas & Friends Storytime podcast.

He has appeared in many British drama series including "Peak Practice" and Heartbeat, and two roles in Emmerdale. He is most famous for his roles as Greg Shadwick in Brookside, Ray Wyatt in Dream Team, Owen Davies in Holby City and Barry, one of the original Scousers, in Harry Enfield and Chums. 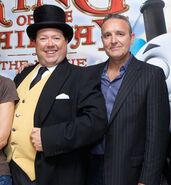 Mark Moraghan at the Tale of the Brave premiere 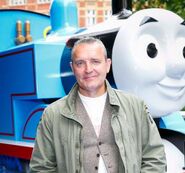 Mark Moraghan at the Sodor's Legend of the Lost Treasure premiere

Mark Moraghan as Mr. Evans in Storytime with Mr. Evans

Deutsch Español עברית Polski Русский
*Disclosure: Some of the links above are affiliate links, meaning, at no additional cost to you, Fandom will earn a commission if you click through and make a purchase. Community content is available under CC-BY-SA unless otherwise noted.
Advertisement