Message Mix-Ups! is a magazine story.

Henry has just been repainted and is carrying the Fat Controller from the Works to Knapford. Suddenly, a rock tumbles onto the line ahead and blocks a tunnel. Henry insists that he can push the rock aside, but the Fat Controller does not want him to damage his new paintwork. Then Caroline rolls along and stops next to Henry who asks her to take a message to James asking him to come and clear the tunnel. Caroline motors on towards the main station, trying hard to remember the message.

Caroline finds James in the yard shunting trucks. Caroline struggles to recall the message and instead of telling James to clear the tunnel, she tells him to "use a brush to clean your funnel". James is puzzled, but assumes it must be something to do with the coal he is burning. James, thinking it may be an emergency, asks a chimney sweep, who has arrived to sweep the station's chimney, to clean out his funnel immediately.

Meanwhile, Harvey had been passing the tunnel and had kindly moved the rock for Henry who now steams into the main station. Just as he arrives, clouds of soot billow from James' funnel and cover Henry's bright, new paintwork. The two engines start arguing about who is to blame for the incident, but the Fat Controller steps in and sorts out the confusion. He also promises the two engines a "Super Duper Wash and Polish".

The two engines share in a laugh when they find out about Caroline's muddled message and the Fat Controller goes for a well-earned cup of tea. 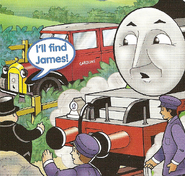 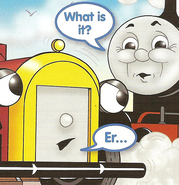 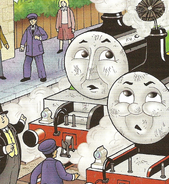 Add a photo to this gallery
Retrieved from "https://ttte.fandom.com/wiki/Message_Mix-Up!?oldid=1698428"
*Disclosure: Some of the links above are affiliate links, meaning, at no additional cost to you, Fandom will earn a commission if you click through and make a purchase. Community content is available under CC-BY-SA unless otherwise noted.