Midnight Mavis is a magazine story.

It is freezing cold and snowing on the Island of Sodor. Donald and Douglas have been fitted with snowploughs to push the snow away from the Main Line. James is being just as useful, pulling Terence on a flatbed to clear roads at the farms and villages. Thomas is doing his bit too. He has fetched lots of sand to fill the engines' sandboxes.

Meanwhile, the Fat Controller tells Mavis to rest in the engine shed all day. When the engines return from working hard all day, they are most surprised to see Mavis sat there doing nothing. Mavis feels awful.

Later that night, Mavis' driver takes her out of the shed. For hours Mavis rolls up and down the railway lines. Mavis returns to the shed just as everyone is starting work. The engines are most puzzled to hear what Mavis has been doing, but the Fat Controller explains that Mavis has been rolling up and down the lines so that the friction from her wheels keep the rails ice-free. Now, the other engines are pleased and admit that "Midnight Mavis" is really useful, too. 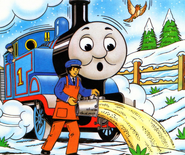 Add a photo to this gallery
Retrieved from "https://ttte.fandom.com/wiki/Midnight_Mavis?oldid=1701758"
Community content is available under CC-BY-SA unless otherwise noted.