“Do they expect me to pull that?!”
―Daisy refusing to pull the milk van, Branch Line Engines

The Milk Van is an old-fashioned van used for transporting milk from Ffarquhar down to the dairy at Elsbridge.

Every morning the van is coupled to Thomas' first train, the farmers send the milk to the stations and Thomas delivers the milk to the dairy. When Daisy was preparing for her first train, she refused to pull the van once it was coupled to her claiming it was "bad for her swerves", and she blew a fuse on purpose. Percy and Toby had to take the van in Thomas' absence and Daisy's refusal. However, now that Daisy has learnt sense, she sometimes takes the milk instead of Thomas.

The milk van has occasionally been added on Percy's Mail Train.

The milk van is based on the Great Western Railway's four-wheel slatted side milk van.

The milk van is painted chocolate brown with a light grey roof and with "NW" in yellow paint on both sides. In the My Thomas Story Library books, the milk van was painted dark blue with white lettering reading "MILK" on both sides. 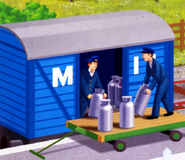 Daisy with the milk van

The milk van coupled up to Daisy

The milk van behind Henrietta 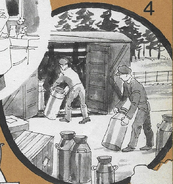 Awdry's model of the milk van 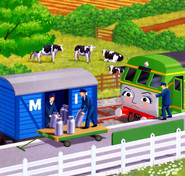 The milk van in a My Thomas Story Library book 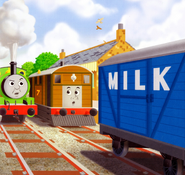 Wooden Railway dairy cars
Add a photo to this gallery
North Western Railway
* RWS only | ** T&F only | --- Dropped
Ffarquhar Branch Line
* RWS only | ** T&F only
Retrieved from "https://ttte.fandom.com/wiki/Milk_Van?oldid=1664074"
*Disclosure: Some of the links above are affiliate links, meaning, at no additional cost to you, Fandom will earn a commission if you click through and make a purchase. Community content is available under CC-BY-SA unless otherwise noted.