Mirror, Mirror is a magazine story.

One morning, the Fat Controller asks James to take a special delivery of mirrors to the seaside. James does not like pulling goods trains, but he does not dare say no to the Fat Controller. However, when James sees his reflection in the mirror, he is surprised to see that he looks very fat. He decides to do some exercises, racing around a branch line and through the main station again. He even manages to blow the Fat Controller's hat off. Nearby, Caroline is waiting at a crossing, James races through a puddle and splashes mud all over her. Then James races up behind Percy, who is pulling a slow goods train. To get out of the way, Percy swerves into a siding. James steams right round the island before returning to the main station. When he looks at himself in the mirror, he thinks he has shrunk. The Fat Controller laughs, and says that they are special mirrors for the "Hall of Mirrors" at the pier, James feels very silly. 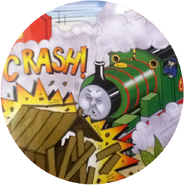 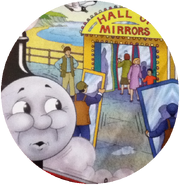 Add a photo to this gallery
Retrieved from "https://ttte.fandom.com/wiki/Mirror,_Mirror?oldid=1701768"
*Disclosure: Some of the links above are affiliate links, meaning, at no additional cost to you, Fandom will earn a commission if you click through and make a purchase. Community content is available under CC-BY-SA unless otherwise noted.