Thomas is given the honour of collecting special Jobi Wood from the Mainland. There is no room on the ship, so Thomas is pulled along on a raft. The raft's chain breaks and Thomas gets lost at sea and finally drifts onto a strange island where he meets three Logging Locos named Bash, Dash, and Ferdinand. Thomas finds the special Jobi wood on Misty Island and tries to take it back to Sodor via an underground tunnel, but they get stuck. Thomas sends a smoke signal through a hole in the tunnel's roof. Percy sees the signal and alerts the Fat Controller, who sends his best engines to Misty Island to save Thomas and the Logging Locos. The Sodor Search and Rescue Centre is soon complete and there is a grand opening. 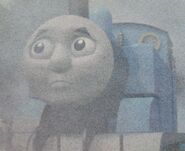 Thomas in the mist

Thomas with Bash and Dash

Whiff, Percy, Thomas, Bash, Dash, and Ferdinand
*Disclosure: Some of the links above are affiliate links, meaning, at no additional cost to you, Fandom will earn a commission if you click through and make a purchase. Community content is available under CC-BY-SA unless otherwise noted.
Advertisement