Model Engines is a magazine story.

One morning, the Fat Controller arrives to speak to his engines in the yard. They have all been specially washed and stand gleaming in the sunshine. The Fat Controller tells the engines that an inspector is coming and he wants them all to show him how useful they are.

Henry is to collect the inspector from the harbour. As he is about to set off, the Fat Controller's wife arrives with Stephen and Bridget. They tell Henry that they are going to an arts and crafts show. Henry drops them off on the way to the harbour. Unfortunately, when Henry arrives at the harbour, the ferry bringing the inspector is running late. When, he eventually arrives, Henry takes him straight to the main station.

By now, Stephen and Bridget have arrived back at the station via the express. The children show their grandfather two model engines they have purchased at the arts and crafts show. Stephen suggests they race the models along the platform. The Fat Controller tries to stop his grandchildren, but it was too late. The model engines roll off the edge of the platform, right in front of Henry's train. Henry brakes hard and causes the inspector to slide off his seat.

The model engine carries on rolling towards the station yard. It rolls right in front of Bill who has to brake sharply to avoid hitting it, then the little model has a close encounter with Ben, too. The second model engine heads towards Duck who is shunting trucks. Duck's wheels miss the toy train by just a few inches. Duck has turned so quickly that his trucks overbalance and spill their loads of coal onto the track.

At last, the two model engines come to a halt and the Fat Controller goes to collect them. Stephen and Bridget apologise; they did not mean to cause so much trouble and they explain themselves to the inspector. Much to everyone's surprise, the inspector is not angry; he is pleased that the Fat Controller's engines acted safely in an emergency. Everyone is happy; the real engines are "model engines", too. 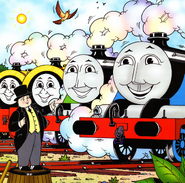 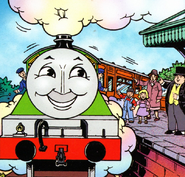 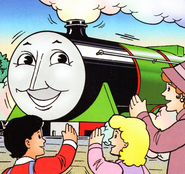 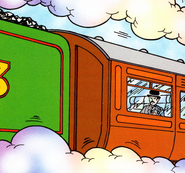 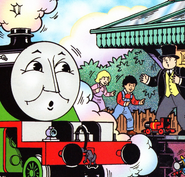 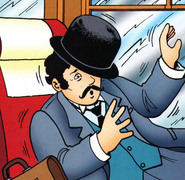 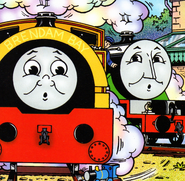 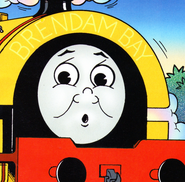 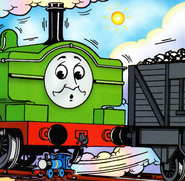 Add a photo to this gallery
Retrieved from "https://ttte.fandom.com/wiki/Model_Engines?oldid=1664050"
*Disclosure: Some of the links above are affiliate links, meaning, at no additional cost to you, Fandom will earn a commission if you click through and make a purchase. Community content is available under CC-BY-SA unless otherwise noted.