In 2005, Molly made her debut in the ninth series of Thomas & Friends in the episode, Molly's Special Special. She later appeared in the tenth and eleventh series and also in the special, The Great Discovery.

Molly has not appeared in the television series since 2008.

Molly is based on a Great Eastern Railway D56.

Molly's model was scratch built from brass to run on gauge 1 track, Her wheels and chassis were CNC.

Four facial expressions were made for her that were seen on screen as well as four prototype faces. The faces were first sculpted in clay and from that resin casts were made using a silicone mould.

The eye mechanism had two servos one for up and down movement, The other for left and right movement.

Like any other tender engines, Molly had wires between the engine and her tender. This was also seen in sideview promo art drawn based on the Production Measurement Reference.[1]

Molly's wires inside her cab

Molly's sideview promo art
Add a photo to this gallery

In the episode, Molly's Special Special, Molly was seen with a lamp. This was powered by a hidden battery pack.

Note: Molly's lamp is facing backwards
Add a photo to this gallery

Molly's model used to be on display in Canada at Nitrogen Studios. As of March 2020, it is on display at Drayton Manor Theme Park.

Her face was small in the series but she originally had a larger face, assumed to be a prototype as it never made its way into the television series though almost all of her merchandise depict her with her prototype face (this includes packaging art). Three of Molly's prototype faces are now owned by Twitter user ThomasTankMerch.[2] 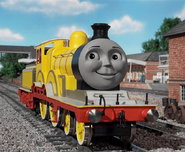 Retrieved from "https://ttte.fandom.com/wiki/Molly/Behind_the_Scenes?oldid=1786945"
*Disclosure: Some of the links above are affiliate links, meaning, at no additional cost to you, Fandom will earn a commission if you click through and make a purchase. Community content is available under CC-BY-SA unless otherwise noted.