Mountain Village Station, also known as the Upland Station or the Top Station, is a station located at the foot of Shane Dooiney on the Skarloey Railway east of the Blue Mountain Quarry. It was first seen in the ninth series and was last seen in the twelfth series.

The inside of the station

Skarloey at the Mountain Village

The station in the tenth series

The station in the eleventh series

Freddie at the Mountain Village 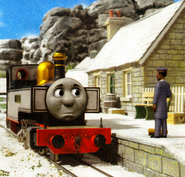 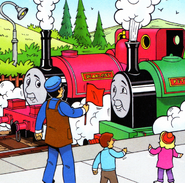 Top Station in a 2001 magazine story

Duke at Top Station
Add a photo to this gallery
Skarloey Railway
* RWS only | ** T&F only
Retrieved from "https://ttte.fandom.com/wiki/Mountain_Village_Station?oldid=1797072"
*Disclosure: Some of the links above are affiliate links, meaning, at no additional cost to you, Fandom will earn a commission if you click through and make a purchase. Community content is available under CC-BY-SA unless otherwise noted.