Mr Jolly's Chocolate Factory is a chocolate factory on Sodor.

Every day, one of the engines has to go to the factory where their trucks are filled with Mr Jolly's world-famous chocolate bars and other confections. His chocolate is so popular that, on occasion, Harold has been employed to deliver it to places that the engines cannot get to. Percy once smashed through the walls of the factory and got covered in chocolate, but, just like all the other engines, he is still very pleased to be given the opportunity to visit the factory.

Ever since Percy had his accident here, it appears to no longer be located at the bottom of a hill. According to a 2014 television series map, it is located just north of Killdane on the Peel Godred Branch Line. 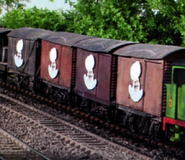 Mr. Jolly's Trucks
Add a photo to this gallery

Peel Godred Branch Line
* RWS only | ** T&F only
Retrieved from "https://ttte.fandom.com/wiki/Mr._Jolly%27s_Chocolate_Factory?oldid=1760880"
*Disclosure: Some of the links above are affiliate links, meaning, at no additional cost to you, Fandom will earn a commission if you click through and make a purchase. Community content is available under CC-BY-SA unless otherwise noted.