In some merchandise lines, Mr. Percival has been depicted with a car. The car has not appeared in the television series, though a similar car appeared being scrapped in The Truth About Toby. It is unknown whether this is actually the same car or not.

As the mould for the car is re-used from Sir Topham Hatt's Car, the car is based on a Rover P4 90.

Mr. Percival's car is painted red. Its Take-Along toy has red hudcaps, whereas its Take-n-Play toy has silver hudcaps. 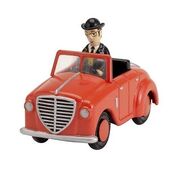 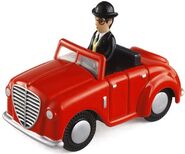 A similar car in The Truth About Toby
*Disclosure: Some of the links above are affiliate links, meaning, at no additional cost to you, Fandom will earn a commission if you click through and make a purchase. Community content is available under CC-BY-SA unless otherwise noted.