“I guess you don't mind being muddy anymore."
"Not when I have a job to do, Sir! But now that it's done, I think I need a trip to the washdown to clean myself up!”
―The Fat Controller and James

Muddy Matters is a magazine story, it was illustrated by using images from the CGI television series.

The Fat Controller needs an engine to transport Farmer McColl's sheep to the Farmer's Fair. When he says that the engine in question will have his photograph in the newspaper, James immediately volunteers and promises to be the cleanest engine there is.

James collects the sheep and starts on his way. After a while he comes across a junction. One track is wet and muddy while the other is old and bumpy. Not wanting to get his paintwork dirty, James chooses the bumpy track which jiggles the lock loose on the wagon with the sheep in.

At Maron Station, James stops to boast about his photo opportunity to Emily. Suddenly, the sheep bolt out of the wagon and run away. James gives chase to the sheep and soon comes across another two tracks. This time, one is long and dry and the other is muddy, but faster. James wants to stay clean and decides to take the longer track. By the time he reaches the sheep, they walk off again.

James soon manages to get close to the sheep again and Katie, Farmer McColl's sheepdog, rounds them up. James is so pleased that he gives off a happy whistle, which scares the sheep who run away again. James realises that all of the confusion is his own fault and decides he cannot let Farmer McColl down, even if it means getting his paintwork dirty. James sends Katie to round up the sheep again and this time he puffs along the fast muddy track, straight through a muddy puddle.

James soon meets up with Katie who is also covered in mud. Thomas puffs past and remarks how dirty James looks. James says it does not matter, as long as the sheep are at the fair on time. The sheep are soon secured back in their wagon and James puffs off to the fair as fast as he can.

When James arrives at the Farmer's Fair, the Fat Controller is shocked to see his engine looking so filthy. However, the photographer is pleased to see a hard-working engine and muddy sheep, straight from the field. James feels very proud as he has his photograph taken. Afterwards, James heads straight to the wash-down. 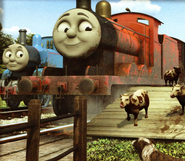 Add a photo to this gallery
Retrieved from "https://ttte.fandom.com/wiki/Muddy_Matters_(2014_magazine_story)?oldid=1708985"
*Disclosure: Some of the links above are affiliate links, meaning, at no additional cost to you, Fandom will earn a commission if you click through and make a purchase. Community content is available under CC-BY-SA unless otherwise noted.