My First Thomas with James

My First Thomas with James

My First Thomas with Percy

The My First Thomas series is designed to be an introduction for new fans who are just embarking on their journey into the wonderful world of Thomas & Friends. Each collection focuses on one key character from the series and allows the fledgling Thomas fan to get familiar with Thomas, the Island of Sodor and all the fun adventures the friends have every day. 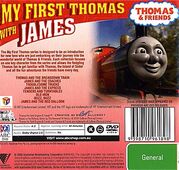 Japanese DVD back cover and spine

Episode selection
*Disclosure: Some of the links above are affiliate links, meaning, at no additional cost to you, Fandom will earn a commission if you click through and make a purchase. Community content is available under CC-BY-SA unless otherwise noted.
Advertisement