Thomas is at the main station with the Fat Controller. Suddenly, the Fat Controller hears his office telephone ringing. He rushes to answer it, but is too late. The Fat Controller is upset; that call could have been important. Then, he has an idea and boards Thomas' train headed for Wellsworth, where he goes shopping. On his return, he shows Thomas his new mobile phone; now he will never miss a call.

Later, as Thomas returns to the main station, a suitcase topples off the baggage trolley and onto the line in front of Thomas. This causes him to pull up sharply, sending his passengers bouncing around the carriages. A startled Sir Topham Hatt steps out of his coach and is called away to a new freight customer.

Soon, while Thomas, Annie, and Clarabel are being cleaned, they hear faint music. They are sparkling clean by the time the Fat Controller returns - but he has lost his mobile phone. Thomas tells him about the faint music they heard and this makes Sir Topham remember to check where he was sitting. Soon, the Fat Controller finds his phone and has also solved the musical mystery - it was his mobile phone ringing inside Clarabel. 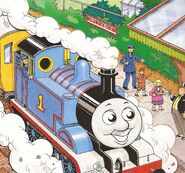 Add a photo to this gallery
Retrieved from "https://ttte.fandom.com/wiki/Mystery_Music?oldid=1709124"
*Disclosure: Some of the links above are affiliate links, meaning, at no additional cost to you, Fandom will earn a commission if you click through and make a purchase. Community content is available under CC-BY-SA unless otherwise noted.