Natalie is an American diesel shunter who works in San Francisco.

When Sir Topham Hatt arrived in San Francisco, he asked Natalie if she had seen Thomas, to which she claimed that she had not after being shown a picture of him.

She later greeted Thomas when he delivered his coffee and asked where Nia was. Natalie told him that Nia was heading for China. Thomas thanked her before leaving to ask Carter to load him onto a ship.

Natalie is a kind and helpful engine who is always friendly to passersby, and always asks if they need help with anything.

Natalie is based on 0-4-0 diesel-hydraulic shunter no. 3207 "Leys" built by W. G. Bagnall. It was the last locomotive built by Bagnall before the firm was taken over by English Electric. It is now preserved on the Foxfield Railway. Dart is another member of this class.

Natalie is painted blue and red with yellow lining. She has yellow and black hazard stripes painted on her bufferbeams. 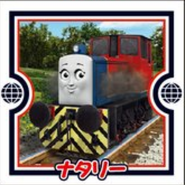 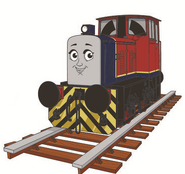 Natalie's basis
Add a photo to this gallery
International Characters
* RWS only | ** T&F only | ✦ Changed location
Retrieved from "https://ttte.fandom.com/wiki/Natalie?oldid=1706743"
Community content is available under CC-BY-SA unless otherwise noted.