Neil was a dark green tank engine with an unusual box shape and a heavy Scottish accent. He was a simple but kind engine, who befriended Skarloey when he was young.

Neil was built at Neilson and Company's Hyde Park Works in Glasgow, Scotland around 1856, for the Sodor and Mainland Railway and was a typical contractors' engine of the period. In 1865, he helped to ferry Skarloey from the harbour of Kirk Ronan to his home at the Skarloey Railway terminus of Crovan's Gate. He warned Skarloey about trucks and the two became friends. [1]

Neil was later sold to the Crovan's Gate Mining Company to raise funds for the struggling Sodor and Mainland Railway once it stopped carrying freight, to bring slate from the transhipment sidings at Crovan's Gate to the harbour at Kirk Ronan. Neil survived until at least the formation of the North Western Railway, however what ultimately became of him is unknown.[2]

Not much was known about Neil; however, according to Skarloey, he can be described as "ugly but kind".

Neil is based on a Neilson 0-4-0 box tank, a simple and robust class of engine built in Glasgow, Scotland and sold all over the world. This basis is reflected in his name and class. His country of origin also explains his accent. All members of this class were withdrawn and scrapped.

Neil was painted dark green with his company's initials (S&M) and his number (2), painted on the sides of his box tank in yellow. 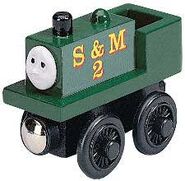 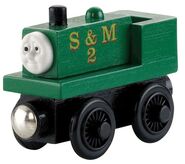 Sodor & Mainland Railway
Español עברית 日本語 Polski Русский
*Disclosure: Some of the links above are affiliate links, meaning, at no additional cost to you, Fandom will earn a commission if you click through and make a purchase. Community content is available under CC-BY-SA unless otherwise noted.
Advertisement