Nick Jr. is a television programming block on Nickelodeon and an American/English television channel owned by Paramount Global. They aired Thomas & Friends in the UK, Ireland, Australia, the Netherlands, India and the US. They also helped to produce the seventh series of Thomas & Friends.

Nick Jr. started airing Thomas & Friends in 1999 in the UK and Ireland daily. The sixth series premiered on this channel in 2002. From 2004 to 2010, they had a night-time block called Nick Jr. Classics (formerly known as Noggin from 2004-2005) that aired episodes of David Mitton's time as director. On August or another month 2004 or 2005 during weekends, they paired two episodes from the eighth and ninth series. Thomas & Friends began airing new episodes on the weekdays as well in 2005. Nick Jr. Too (formally known as Nick Jr. 2) started airing Thomas & Friends from 2006, which aired Series 10. These airings were also used on the US television network, PBS Kids and on the Canadian television network, Treehouse TV. Thomas & Friends was taken away from Nick Jr. sometime in 2014, but continued to air on Nick Jr. Too until early 2017 before being moved to Cartoonito in March 2017. However, the Nick Jr. Website still features the Thomas & Friends activities. After Cartoonitio aired Thomas & Friends, the episodes in the half-hour airings of Thomas & Friends on Nick Jr. Too were divided into two time-slots repeating the opening, Engine Roll Call song and ending and not having the songs that come in the middle of the airings and the "Today on the Island of Sodor" opening. In October 2021, it was announced that All Engines Go would expand globally, and was sold to broadcasters around the world, in which Nick Jr. would broadcast All Engines Go in the UK and Ireland, alongside Milkshake!.

In the Netherlands, Nick Jr. aired the first series up until the thirteenth series as part of Nickelodeon's main programming and on Nick Jr.'s own 24/7 TV channel. Nick Jr. always aired standalone episodes. Nick Jr.'s logo was featured on the front cover of the Dutch DVD releases of the first series to the fourth series by Bridge Entertainment.

In the US during the Summer of 2000, they aired the second and third series of Shining Time Station to promote Thomas and the Magic Railroad. Some episodes of Thomas & Friends also played as small segments during commercial breaks before the next show while Shining Time Station was on the air. Thomas & Friends also came to Nick Jr. in Australia for a while.

The Thomas & Friends partnership with PBS ended on 31 December 2017 and the Christmas/Winter episodes of the twenty-first series were broadcast on Nick Jr. as a special holiday program. Starting on 12 March 2018, Nick Jr. and the main Nickelodeon channel started regularly airing Thomas & Friends again nearly eighteen years after the 2000 airings, beginning with an airing of The Adventure Begins.

As of early 2020, the Thomas & Friends partnership with Nick Jr. ended, and all traces of it were removed from the website. Shortly after the Nick Jr. partnership ended, Mattel made a deal with Netflix to stream Thomas & Friends in the US, starting from March 2020. After the announcement of the 2021 reboot, Thomas & Friends: All Engines Go, Cartoon Network acquired the broadcast rights for the show in the US. 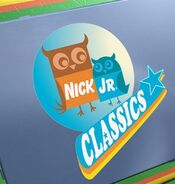