Thomas the Tank Engine Wikia
Register
Don't have an account?
Sign In
Advertisement
in: Organisations, US TV channels, TV Channels,
and 2 more
English

Sometime in 1977
Nickelodeon is an American basic cable and satellite television network launched on 1 December 1977 and is owned by Paramount Global, through Paramount Domestic Media Networks, and based in New York City.

Their preschool block, Nick Jr. aired Thomas & Friends in the UK and Ireland from 1999-2017 and aired Shining Time Station throughout the summer of 2000 in the US to promote the film Thomas and the Magic Railroad.

In the Netherlands, Thomas & Friends aired on Nickelodeon from 1 September 2002 up until 10 May 2015. Series 6 to series 11 and series 13 premiered on this channel between 2004 and 2010. Nickelodeon also re-aired series 1 to series 5. Nickelodeon always aired standalone episodes.

Thomas & Friends aired on Nick Jr. from December 2005 up until 10 May 2015 in the Netherlands. The preschool channel aired the same series as Nickelodeon did in the country.

Thomas & Friends aired on Nickelodeon in the US on 15 December 2017 with a showing of The Christmas Coffeepot and Terence Breaks the Ice. The following week, Emily in the Middle, Daisy's Perfect Christmas, The Big Freeze and Over the Hill aired on the Nick Jr. channel.

After PBS' contract for the series ended on 31 December 2017, Mattel announced that Nick Jr. would be the new US home for Thomas & Friends beginning on 12 March 2018 with an airing of The Adventure Begins. Nickelodeon also aired episodes and at the time, they were the exclusive consumer products licenser for the US.

In 2020, Mattel ended their contract with Nickelodeon and made a new deal with Netflix to stream Thomas & Friends episodes in March the same year. However, the two companies later drew a up a new contract that sees Nickelodeon broadcasting the UK dub of All Engines Go in 2022. 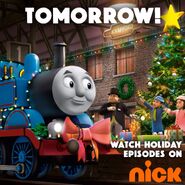 Promo for the premiere of Thomas & Friends